This page is jammed packed with interesting Botswana facts you're going to love... 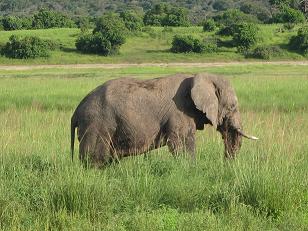 Fact: Botswana has the largest African Elephant population in the World

A lot people have no idea about the location of Botswana. Some think it actually part of South Africa!

Since most people have heard of South Africa, when people ask me where Botswana is...i usually tell them, its the country that lies  north of South Africa.

I really do not blame them.

Since Botswana is neatly tucked between South Africa, Zambia, Zimbabwe and Namibia, it may at times be hard to spot.

Also, since the country is relatively small (about the size of France or Texas) it may not catch your eye at first glance.

The best way to explain the location of Botswana is through a map of Africa.

So if you still have no idea where Africa's best kept secret is, check out the map below for a graphical explanation :) .

So What is Botswana Famous For?.....the country is mostly famous for...

But that's not all, here are more interesting facts about Botswana you 're going to find useful when planning your safari:

The climate in Botswana is predominantly semi arid with two main seasons, winter and summer.

The summer season extends from October to April. Summers are rainy with hot days and warm nights. Most of the rainfall occurs between January and March...

Winter starts in May and ends in August/September. Winters are dry, sunny and cool.

Rainfall in Botswana occurs mostly in the summer season.

The summer season starts in November and ends in April.

Most of the rainfall however takes place between November and February.

January and February being peak months.

If you are going to visit around this time then it is advisable that you bring either an umbrella or light summer raincoat!....

...the umbrella will also come in handy in the intense summer sunshine ;-)...

Chart : Average Rainfall in Millimetres(mm) and Inches (in)

Knowing Botswana holidays can be helpful when planning to visit. This is because all banks and most shops close during public holidays in Botswana.

To help you plan your safari vacation better, i have compiled a list of all the public holidays.

See the table below for holiday dates and their respective names:

The Botswana Time is two hours ahead of Greenwich Mean Time (GMT).

So the Botswana summers have plenty of sunshine . The winters do too but the summers tend to have more than 12 hours of sunshine.

So if you enjoy being in the sunshine you going to love Botswana. :-)

However bring along an umbrella and sun block cream to avoid extreme exposure to sunlight...

Facts About the Population Of Botswana

The Botswana National Anthem took effect when the country gained its independence in the year 1966.

Here i share with you the original version in Setswana and its English translated version.

Keep in mind that the anthem is sung in Setswana, the official language.

The English version is just to further your understanding of the anthem and its message.

Blessed be this noble land,
Gift to us from God's strong hand,
Heritage our fathers left to us,
May it always be at peace.

Awake, awake, O men, awake!
And women close beside them stand,
Together we'll work and serve
This land, this happy land!

Word of beauty and of fame,
The name Botswana to us came.
Through our unity and harmony,
We'll remain at peace as one.

Awake, awake, O men, awake!
And women close beside them stand,
Together we'll work and serve
This land, this happy land!

Check out the table below for  few quick facts about the  Geography of Botswana.

It has a center shield that is supported by two zebras. The zebra indicate the importance of wildlife in Botswana.

At the bottom of the shield is a head of a cow which symbolize the importance of cattle herding in Botswana.

The Zebra on the right holds sorghum showing the important role farming plays in the lives of Batswana. The Zebra on the left holds an ivory task . This is a symbol of the ivory trade of the past.

There are only two Botswana Cities. Only Gaborone (the capital city) and Francistown have been classified as cities.

Now i am not too certain how the classifications go, but there are other settlements that are large in Botswana. Such as...

All the above are far from being cities but they all have most of the services that are provided in cities. Like malls, banks, grocery stores, ATM machines, clothing stores...just to name a few.

There are Several Botswana Newspapers, all of which will keep you up to date on whats happening in Botswana when you visit.

8. The Ngami Times (Based in Maun, however they do cover general Botswana news. Make sure to get yourself  a copy when in Maun)

All newspapers can be purchased from service / gas stations, grocery stores , street vendors and book stores.

What Language is Spoken in Botswana?

There are many languages, in fact there are well over 30 languages used in Botswana.

The national language is Setswana. It is the most widely used language in Botswana.

English is the second most used , considering that it is used a lot in schools, newspapers, urban settlements and within the business community.

Language Tips For You

If you are coming for a safari in Botswana, don't panic as English alone is sufficient for communication.

However, we tend to love it when a foreigner puts in a bit of effort in learning the basics of Setswana... ; -)

Here's how you can score brownie points with the locals...

Before you begin a conversation you should first greet.......and here's how you greet in Setswana...

You can think of the above as "ice breakers" in any conversation whether you intend to converse in either English or Setswana...

If you want to learn more about the other languages spoken in Botswana checkout the reference websites below:

Botswana is famous for being the largest diamond producer by value; however what most people don’t know is that there are many other minerals mined in the country.

Even though the above minerals might not bring in as much foreign revenue as diamonds, they still play a significant role in the contribution to the country's GDP.